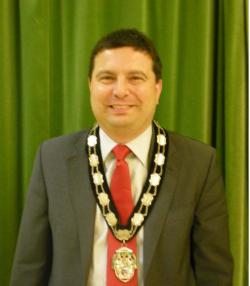 I am delighted to have been elected Town Mayor for 2011/2012 and to have been given the opportunity to represent the Town Council and to support LAMP, my chosen charity, throughout the forthcoming year. I am very much looking forward to visiting as many community groups as possible to meet the people of Braunstone Town.

If you would like to me to visit your group, judge a competition, award prizes, etc please contact the Council's Community Development Officer, Mrs Pauline Snow on 0116 2890045.

Congratulations to Mr Gary Sanders who raised a total of £2800 for his chosen charity, LAMP.
And thank you to all those who have supported him during his term in office. 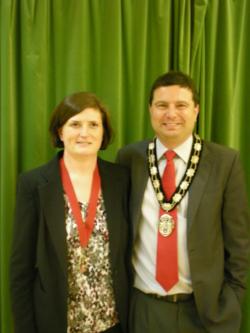 The Town Mayor and his consort, his wife, Fiona 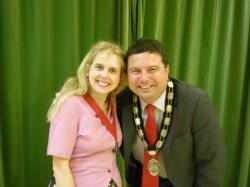 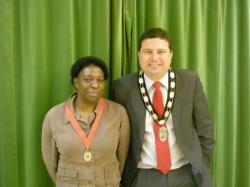 The detail of the Town Mayor‘s Diary for the forthcoming year is as follows:

The Town Mayor was honoured to received two additional Rolls of Honour boards on behalf of the Town Council from the Royal Air Force Association in memory of the those who had lost their lives in conflicts. A short service of Dedication, taken by Reverand Arthur Deegan, preceeded the unvieling of the boards. 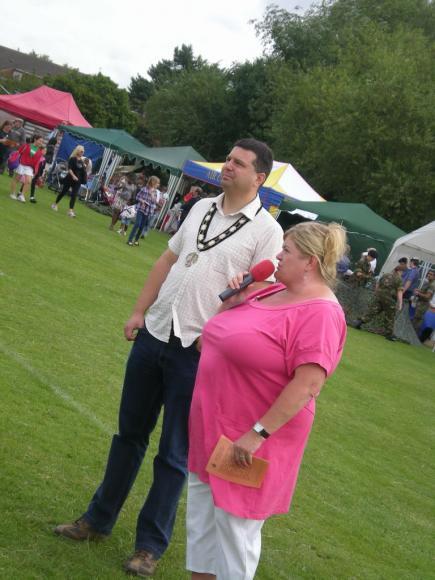 Sunday 18th September 9.30am - Battle of Britain Parade and Service

Many Congratulations to Janice Lock on winning the Best Apple Produce Competition with her delicious cake which was judged by the Town Mayor, Mr Gary Sanders and his consort, his wife Fiona. The competition was very strong with an amazing varieties of cakes and sauces.

A huge thank you to everyone who turned out on Saturday 8th October.

The Braunstone Town Watchers Group were awarded 'runners up' in Blaby District Council's Outstanding Achievement Award for their services to make the Town a safer place to live. Representatives of the Town Watchers attended a presentation evening on 13th October at the Marriot Hotel to be presented with their award and the certificate was handed over at a Council Meeting on 10th November 2011 by the Town Mayor, Mr Gary Sanders.

The hard work and dedication that the Town Watchers put in to working alongside the Police and the Council to reduce opportunities for crime, increase public safety and establish a community spirit has long been appreciated by us here in Braunstone Town and it is fantastic to see that this has now been recognised across the District.

The Town Mayor attended the annual Pantomime at Braunstone Civic Centre on Saturday 7th January. Net proceeds from the event will be donated to the Town Mayor's chosen charity - LAMP

Millfield School invited the Town Mayor to officially open their new Art Gallery at the school. The pupils had produced art work based on Picasso and communication and two classrooms were adorned with their work. The Mayor is pictured officially opening the art gallery, signing the visitors book and viewing the art work.

The Town Mayor was invited to officially open the Ravenhurst School 'Mini Olympics' on Friday 23rd March. The pupils had made flags of various countries and attended the opening ceremony before being entertained by the school's "Glee Club". The Town Mayor then officially opened the events. Pupils took part in various sports events during the day before the closing ceremony.

Braunstone Town Mayor, Mr Gary Sanders, was pleased to host the Mayor's Annual Awards ceremony at Braunstone Civic Centre. During the evening the Town Mayor presented cheques to groups who took part in the Programme of Events 2011/2012. He was also pleased to present Awards of Merit to Mrs Jean Storer and Mr Haydn Costin in recognition of their voluntary work in community. Mrs Gwen Potter, a member of the Braunstone Town staff who had now retired after 15 years service, also received a bouquet and a gift from the staff.

Finally, Chloe Oliver received the Young Sportsperson of the Year from the Braunstone Life. Guests enjoyed a buffet and entertainment from classical guitarist, Alan Thomas. 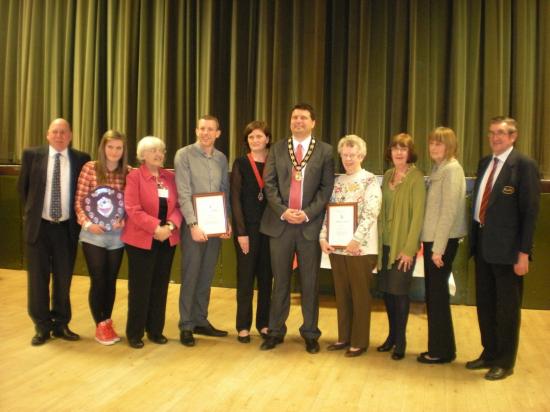