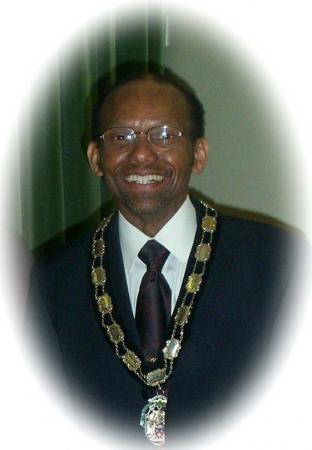 Congratulations to Mr Phillex Moitt who was appointed Braunstone Town Mayor for 2005/2006 on 12th May 2005. Mr Moitt has chosen to support the Prostate Cancer Charity throughout his term in office. We hope you will agree that this is a very worthwhile course.

The Town Mayor has a very busy and varied schedule during his time in office, raising the profile of the Council at many events, visiting community groups, schools, etc. The Town Mayor also hosts a programme of events, the Net proceeds of which go towards his chosen charity.

If you know of a group who would welcome a visit from the Town Mayor or have any events scheduled, please do not hesitate to contact the Council.

If you, or you are aware of anyone else who would be able to make a contribution to the Town Mayor’s Charity, donations would be most appreciated.

Mr Moitt’s wife, Jeanne, will be acting as his consort, and the Town Council would like to wish them both a most enjoyable and successful year.

Braunstone Town Mayor, Mr Phil Moitt, hosted an awards evening on Friday 21st April. This annual event marks the end of the Town Mayor's year and Mr Moitt was pleased to present net proceeds to groups and charities from the Programme of Events. He also presented Awards of Merit to Mrs Madeline Johnson, Mrs Barbara Hall and Mrs Lois Glover. Mr Moitt was also pleased to present a cheque in the sum of £5831.80 to the Prostate Cancer Charity which was his chosen charity for his year as Town Mayor. The evening also included a buffet and musical entertainment by Rhapsody in Song. Mr Moitt also presented gifts to sue Russell, Anne Ward and Sharon Bedder in appreciation for their dedication to the Town Mayor's Charity throughout the year

Mr Moitt found it to be a most enjoyable event, which gave him the opportunity to meet representatives from other Town/Parish Councils and voluntary organisations, and was honoured to represent the Town Council at such a prestigious event.Braunstone Town Council was delighted for its Town Mayor, Mr Phill Moitt, to be invited to a Buckingham Palace Garden Party on 19th July 2005. The event was in appreciation of various organisations and authorities who had made a significant contribution to their community and the Town Council’s own invite was as a result of the Town Council successfully achieving Quality Town Council status in 2004.

The Town Council is proud of the fact that its hard work and commitment to provide a valued service to local residents has been recognised in this invitation.

Presentation of Awards to Front Garden Competition 2005The Town Mayor, Mr Phil Moitt, was delighted to attend the official launch of the new play areas on 12th July along with Councillor Ernie White, Leader
of Blaby District Council. They were joined by representatives of both Councils, the developers, and
Kompan, the suppliers of the playground equipment and children from Kingsway, Ravenhurst and Millfield Primary Schools.
At the launch Mr Moitt said, “The need for this type of equipment was first highlighted in our Parish Plan. I am therefore delighted that we have been able to work in partnership with Blaby District Council in order to access this funding in order to bring the project to fruition – I know that it will be extremely well used”.

The Town Mayor was delighted to present the Awards to the Front Garden Competition Winners for 2005 at the Full Meeting of the Town Council on 8th September. The winners were; First Prize - Mr C Tedds of Watergate Lane, Second Prize - Mrs Hodson of Grass Acres; Mrs A Sneath of Chislehurst Avenue.

On Sunday 11th September the Town Mayor hosted a very successful sponsored walk to raise funds for the Prostate Charity. The Walk was well supported and the Town Mayor would like to thank all those who took part. 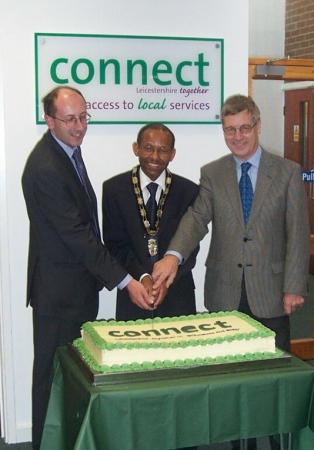 The Town Mayor was delighted to officially launch the new Connect Service Shop on 20th October 2005. Here he is pictured with the Deputy Leader of Braunstone Town Council, Mr Nick Brown, and the Leader of Blaby District Council, Mr Ernie White. The Town Mayor expressed how important it was that the three partners, Braunstone Town, Blaby District and Leicestershire County Councils had worked together to provide a service that brings improved services closer to the local people.

On 25th November the Town Mayor hosted a Caribbean Dinner & Dance evening to raise funds for his charity. The event was a huge success with disco, live entertainment and delicious food. The Town Mayor would like to thank all those who helped in making the event a success.

The Braunstone Town Mayor, Mr Phil Moitt, carried out his Grand Raffle Prize Draw on Friday 31st March. The Raffle was a great success, raising around £830 to his chosen Charity of the Prostate Cancer Charity. There were many prizes available but the following were the top three lucky prize winners:-
First Prize - Weekend in Paris - Mr & Mrs B Foulds, Glenfield Social Club
Second Prize - A pair of Tigers Match Tickets - Denis and Sylvia, Glenfield Social Club
Third Prize - £100 NEXT Vouchers - Mr S Cunningham, addressed supplied.
Mr Moitt, would like to thank all those who donated prizes to the draw, and those who bought tickets, raising funds for a valuable cause.

Mr Phil Moitt, the outgoing Town Mayor, has had a very successful year in which he managed to raise a total of £5,832 towards The Prostate Cancer Charity. He has been busy raising the profile of the Town Council by attending events such as the Thorpe Astley Community Association’s Summer Fete, Diwali Celebrations, the Council’s event to mark the 60th Anniversary of the end of World War II, as well as being welcomed by many Community Groups. Mr Moitt also put on a number of enjoyable events as part of the annual programme as well as hosted his Caribbean Dinner & Dance and Town Mayor’s Awards of Merit evening. Mr Moitt and his consort, Jeanne, would like to thank everyone for their kind and generous support.