Many congratulations to Mrs Sam Fox-Kennedy for her most successful year as Town Mayor. Mrs Fox-Kennedy would like to express her sincere appreciation for everyone's support over the year and all the kind invites to events and celebrations by local community groups and organisations.

Finally, a big thank you to everyone for their help in raising funds for the Town Mayor's charity - a fantastic sum of over £4,300 was raised for LOROS.

I am delighted to have been elected Braunstone Town Mayor for 2012/2013 and to have been given the opportunity to represent the Town Council and to support LOROS, my chosen charity, throughout the forthcoming year. I am very much looking forward to visiting as many community groups as possible to meet the people of Braunstone Town. 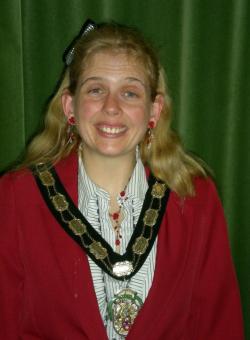 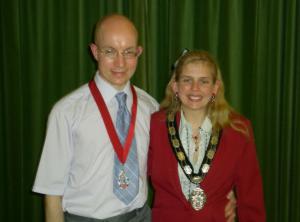 The Town Mayor with her Consort Mr Paul Kennedy 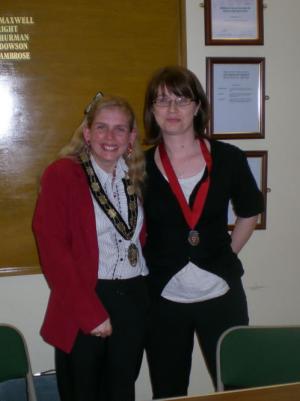 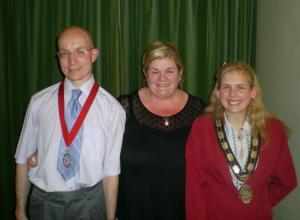 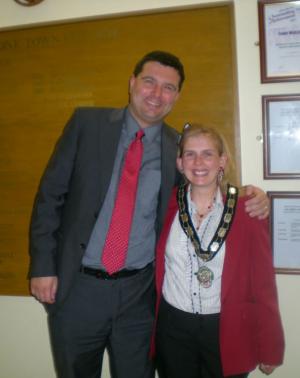 LOROS charges no fees for its services, which are available to all local people regardless of their ethnicity or faith. The Charity relies upon the generosity and support of individual people, organisations and groups as well as Trusts and the business community of Leicestershire andRutlandin order to continue to fund the service.

The Leicestershire and Rutland Hospice is a specialist centre providing skilled nursing and medical care, supported by physiotherapists, occupational therapists and social workers, in an environment that recognises the particular needs of patients and their families. It provides expertise in controlling pain and other distressing symptoms as well as offering emotional, spiritual and social care, which allows patients to live as normal a life as possible. Working with the whole family enables both the patient and the family to cope with the changing situation so that they are able to make best use of the limited time together available to them. LOROS treats patients from the age of eighteen years and upwards.

Braunstone Town Mayor, Mrs Sam Fox-Kennedy, was delighted to host her Awards Night on Friday 10th May. During the evening the Town Mayor presented cheques to local community for the net proceeds raised from events held in the Town Council's Programme of Events. She was also delighted to present a cheque to Mr Derek Horsall from LOROS in the sum of £4330 being the funds raised during her year as Mayor. Following refreshments and a buffet the Mayor was pleased to draw the tickets for her Grand Raffle that she has been running during the year. To end the evening the Mayor presented Awards of merit to residents and groups in Braunstone Town that have worked tirelessly in the community. Guests were entertained during the evening by Elaine and Peter on the violin and keyboard. 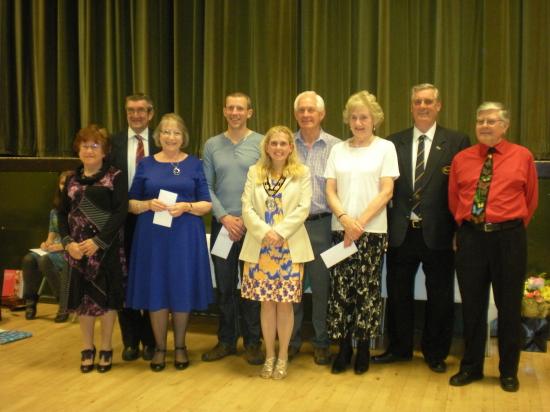 The very popular Christmas Gifts and Crafts Fair was held at the Civic Centre on Saturday and included two rooms of stalls with a wide variety of gifts and crafts to start the Christmas shopping! The Town Mayor organised a Tombola and gifts stall to raise funds for her chosen Charity – LOROS. All charges from the table hire and entry fee to the event will be donated to LOROS

Braunstone Civic Centre welcomed the "Hey Beatles" and their tribute to the Beatles on Friday night and what a fantastic show that the band put on! It wasn't long before the audience were on their feet dancing to the sounds of the Beatles and everyone thoroughly enjoyed the evening! Net proceeds from this event will be donated to the Town Mayor's charity – LOROS.

The lovely weather brought everyone out to enjoy the Apple Day celebrations at the Franklin Park Community Orchard on Saturday 6th October. The Town Mayor joined in with the Bird of prey display and judged the best Apple Produce Competion. The winner this year was Mrs Janet Williams who produced some delicious Apple Muffins. A big thank you to all the volunteers who helped out on the day in setting up and running activities especially those who organised the refreshments which raised a magnificent £95 for the Town Mayors Charity - LOROS. 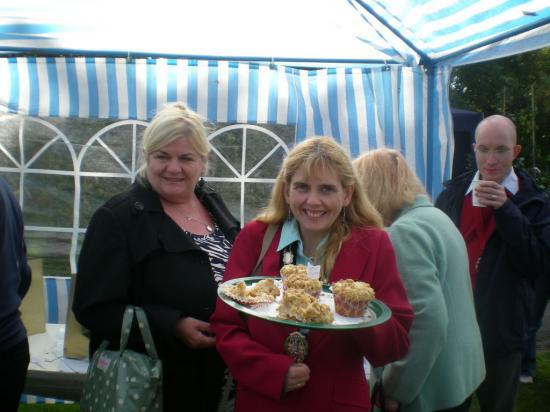 The Town Mayor attended the "Last Night of the Proms" concert performed by the Hathern Band on Friday 14th September. An enjoyable evening was had by all and the Town Mayor was pleased to help with drawing of the raffle tickets.

The Town Mayor attended the Battle of Britain Parade & Service held on Sunday 16th September 2012 at the Cenotaph in Leicester followed by a service at St James the Greater on London Road.

Already been well used and enjoyed by the youngsters in the Town, the newly refurbished multi-sports area, skatepark and play equipment were officially opened by the Town Mayor, Mrs Sam Fox-Kennedy, on 2ndAugust 2012. The project was dedicated to the memory of her father, Councillor Phil Fox, who sadly passed away on 8th April 2012, and who had been instrumental in the initiating the project. Both Mrs Fox-Kennedy and Mrs Jo Fox, Leader of the Council, expressed their appreciation to all those who had come along to the opening to express their support and for the Town Council in marking the work and dedication of Phil Fox in this way. Mrs Jo Fox was delighted to see that the young people were appreciating the new equipment. As part of the projet, Town Council had consulted carefully with them to see what equipment they would like to see included, so it was good to see it being well used. The project was a great enhancement to the park and includes new equipment in the children's play area, fitness equipment and basketball/football and skatepark equipment. The Town Mayor thanked the Shire Grants, Big Society, CAFFY and Community Action Blaby who had all made funding available for the project.

To coincide with the launch and the summer holidays, the Town Council has organised 6 weeks of casual coaching using the Multi Games area and the fitness equipment for young people aged 10 – 19 years. The sessions will be held on the following days:

The sessions are free of charge to all and there is no need to book on the course although you will be asked to complete a registration form when attending. For further details please telephone 0116 2890045.

On Saturday 21st July, the Town Mayor officially opened the Braunstone Town Summer Fete. During the day she presented the prizes to the Winners and Runners-up of the Olympic Flag Competition and the Leicester Forest Photographic Society photo competition. She also got involved with the activities going on including the Zumba demonstration and also took the opportunity to raise funds for her chosen charity, LOROS. 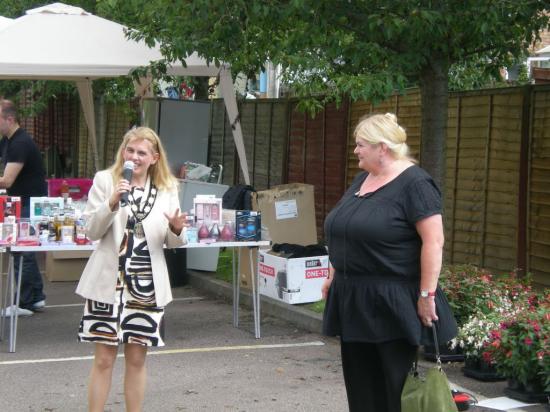 On 10th July, the Town Mayor welcomed a group of Mayors from Albanian who were visiting the District as part of a tour to learn more about the structure of local government within the County. Whilst the Mayors were in BraunstoneTown it was an opportunity for them to learn about the services provided by Parish and Town Councils on behalf of the community.

The Town Mayor attended the burial of the Winstanley School Time Capsule on Tuesday 3rd July 2012. The Time Capsule was the final event in the school's celebration of its 50th Anniversary this year. The Town Mayor was invited to help with the "burial" along with the Chairman of Leicestershire County Council, Mr Peter Lewis, Tony Wadsworth of Radio Leicester, Vice Principal of Winstanley School and the youngest and eldest pupil currently at the school. The ceremony concluded with a buffet and cake cutting. 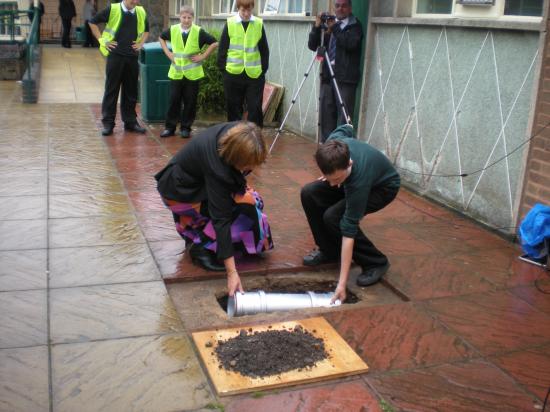 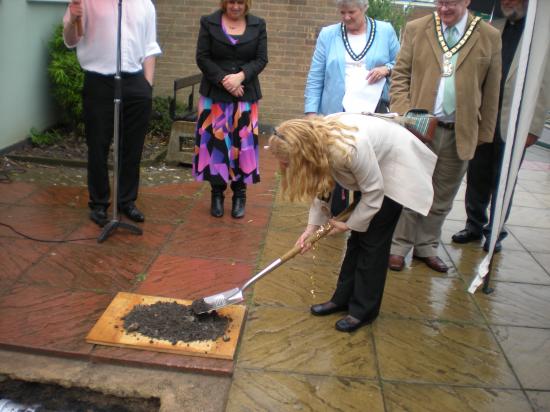 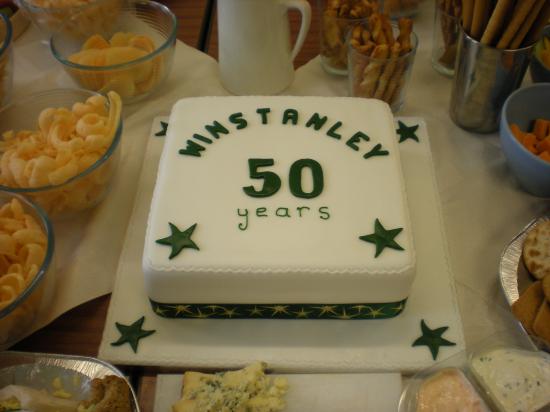 Judging of entries for Flag Competition

The Town Mayor and Consort attended the Youth Council meeting held on 25th June and assisted the council members to judge the entries of the Flag Competition organised by the Youth Council.

The Town Mayor hosted the raising of the official Armed Forces Day flag at Braunstone Civic Centre organised by the Town Council and the Royal Air Force Association on Monday 25th June at 2.00pm. The short ceremony was attended by the Deputy Lieutenant Colonel Robert Martin. The Armed Forces flag would be flown for the week commencing 25th June until Sunday 1st July. 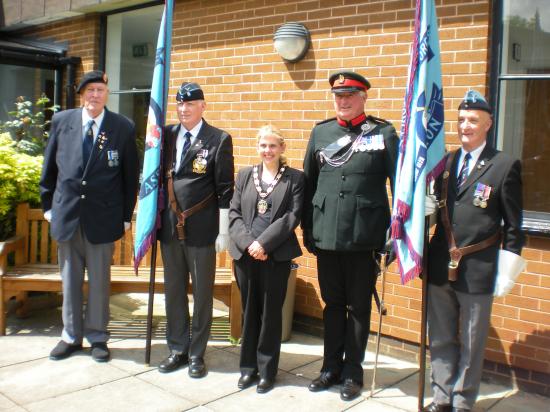 The Town Mayor, Mrs Sam Fox-Kennedy was welcomed by the Franklin Park Working Group to carry out the commemorative planting of two trees in the Franklin Park Community Orchard to mark the Golden Jubilee. The trees had a Jubilee theme 'Jubilee Plum' and 'Royal Medlar'. Other activities involved in the day included Pond Dipping, Planting of Wild Strawberries and refreshments.

The Town Mayor and Consort attended the Thursday Over 60's Jubilee Party at Braunstone Civic Centre on 7th June. The group enjoyed an afternoon party with a buffet and a sing-a-long to favourite old tunes. The Town Mayor was also joined by a member of the Braunstone Town Youth Council who had come along to visit the group and join in with the festivities.

The Big Jubilee Lunch and Service

Join Kingsway Church for a special Jubilee Service from 10.30am including crowing of a King or Queen for the day. The Service will be followed by a Jubilee lunch and games. Everyone is welcome. The Service and lunch will take place at Winstanley School, Kingsway North.

A Jubilee Family Funday has been arranged for 2nd June which will include inflatables, magic tricks, balloon modelling, Crown Making, penalty shoot-out and traditional family fun races. Free activities and fun for all ages. Bring your own Picnic.

The Town Mayor has been invited to present Jubilee medals to pupils of Ravenhurst School to commemorate the Queen's Jubilee. The medals were purchased with help from a grant to the school from the Town Council.