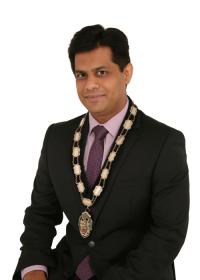 I am delighted to have been elected Braunstone Town Mayor for 2014/2015 and to have been given the opportunity to represent the Town Council and to support Charity Link, my chosen charity, throughout the forthcoming year. I am very much looking forward to visiting as many community groups as possible to meet the people of Braunstone Town. 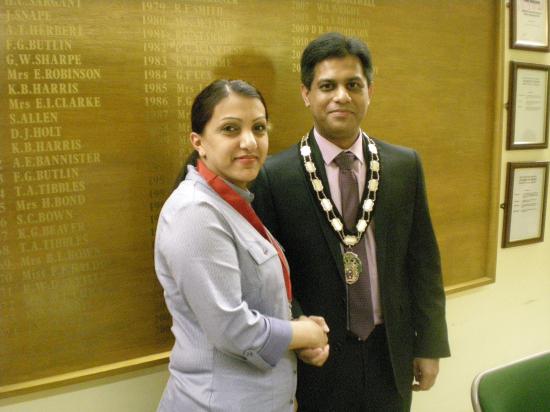 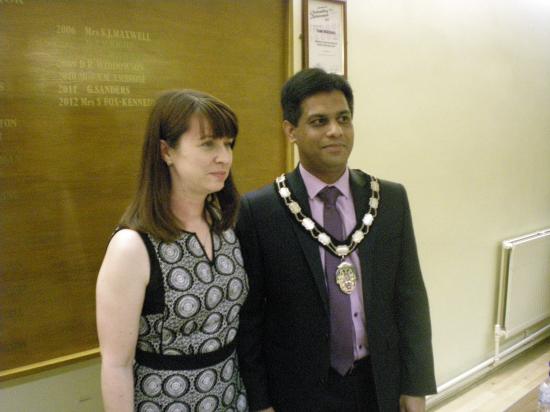 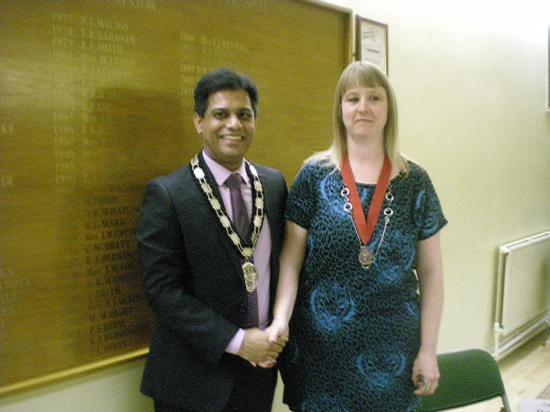 Mr Aslam has chosen to support Charity Link during his term in office. The charity helps by providing everyday items that the majority of us take for granted, such as a bed to sleep in, a cooker to prepare a hot meal and, in emergencies, food. These items may not cost much, but they can make a massive difference to people's lives.

Its uses a network of local organisations that are in the community working with individuals and families in need. Using organisations already in place keeps its overheads to a minimum, increases the efficiency of our services and ensures that it gets the help to those who need it when they need it most.

Once a referral is received, it acts immediately.

If the need is urgent it can help the same day.

Its team gas an expert knowledge of the thousands of benevolent funds in the UK that have money to assist people in need.

For every £10 donated it can raise £50 from charitable trusts that are available to help – all of that £50 goes to those in need.

Once it receive the funds, it purchase the goods required and deliver them direct.

Further information about the charity can be found on its website at http://www.charity-link.org/

The Town Mayor was pleased to host the annual Awards evening on Friday 8th May at Braunstone Civic Centre.

RATBY CO-OPERATIVE SENIOR BAND for a concert held on Friday 26th September 2014 – Local residents enjoyed the 'East Meets West' show which featured music from favourite composers from around the world.

HARVEST COMMUNITY CHURCH for a 1960's/1970's Evening held on Friday 3rd October which featured a live band and supper.

BRAUNSTONE TOWN COMMUNITY MINIBUS for a Quiz & Games Night held on Friday 28th November where over 100 residents enjoyed an evening of games, quizzes and a light supper.

ST CRISPIN'S CHURCH for a Community Quiz Night held on Friday 27th March 2015. Over 125 local residents enjoyed an evening of Quiz questions and a light supper.

The Town Mayor had chosen to support the Leicester Charity Link for his year as Mayor and he was pleased to present a cheque in the sum of £4010 to the charity.

Following a buffet and refreshments the Town Mayor presented local groups with Awards of Merit for their work in the community.

Andy, Helen and Kieran Francis – for their work in setting up and running the 82nd Leicester Scouts, Cubs and Beavers groups based at Thorpe Astley Community Centre. As well as running the weekly the meetings they also help organise community events including a Summer Fete, Halloween Disco and Christmas Fayre.

TS Cutlass Navy Corps – for their activities and support of young people in Braunstone Town in providing structured activities based on the traditions and training of the maritime services so they can learn new skills, and meet new friends. Unfortunately, no representatives were able to attend to receive their award.

Harvest Community Church – for their work in the community including a weekly coffee morning at Braunstone Civic Centre, support for the Town Mayor at the Christmas Craft Fair with refreshments and arranging and supporting community events. 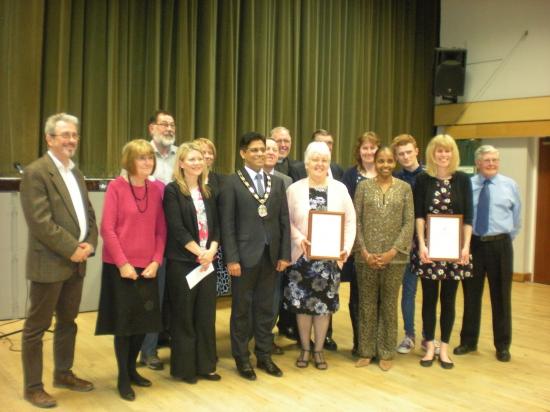 The Town Mayor was delighted to receive a cheque on behalf of Braunstone Town Council from Blaby District Council's Capital Projects Grant scheme. The cheque was in the sum of £5000 and will go towards the refurbishment work to the play area on Holmfield Park.

Raising of the Commonwealth Flag

The Town Mayor was pleased to host a short ceremony and raise the Commonwealth Flag for the first time at Braunstone Civic Centre on Monday 9th March 2015. The Chairman of Leicestershire County Council, Mr Bill Boulter, also attended the event and messages of support were read from Her Majesty the Queen and the Commonwealth Secretary-General followed by the Commonwealth Affirmation before the official raising of the flag at 10am. Members of local community groups and residents also attended the event. Light refreshments were served after the short ceremony. 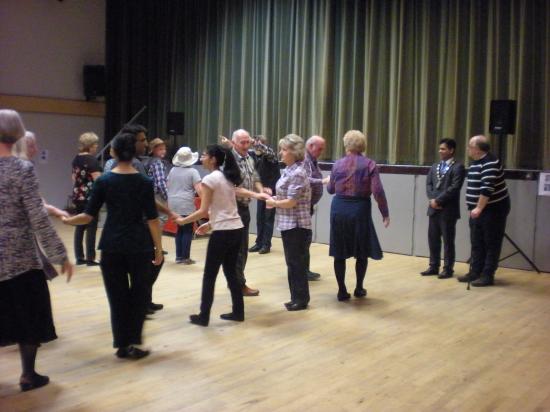 The Town Mayor attended the Fashion Show & Clothes Sale held at Thorpe Astley Community Centre on Friday 30th January. Residents were able to pick up some bargains from the major high street stores and net proceeds from the event will be donated to the Town Mayor's chosen charity - Leicester Charity Link

The Town Mayor attended the Christmas Fair at Thorpe Astley Community Centre on Saturday 13th December organised by the Scouts and Beaver group that meets at the Centre each Monday.

The Town Mayor attended the Christmas Craft Fair on Saturday 22nd November at Braunstone Civic Centre. The event was very well attended by local residents and 50 stalls were selling hand crafted goods and Christmas Gifts. Net proceeds from the event will be donated to the Town Mayor's chosen charity - Leicester Charity Link.

The Town Mayor attended the Flower Demonstration held by the Kingsway Flower Club at Braunstone Civic Centre on Friday 14th November. The event was attended by over 60 local residents who enjoyed an evening marvelling at the fantastic displays created.

The Town Mayor attended the Remembrance Day Service at Braunstone Civic Centre on Tuesday 11th November. The Service was followed by refreshments at the Centre.

The Town Mayor attended the Children's Halloween Disco at Thorpe Astley on Friday 31st October. The event was attended by 80 local residents

The Town Mayor was delighted to host the Diwali Celebration at Braunstone Civic Centre on Friday 17th October. Over 100 residents attended the event and enjoyed a hot meal, disco and raffle.

The Town Mayor enjoyed an evening of music from the 1960's/1970's era as he attended an event on Friday 3rd October at Braunstone Civic Centre. "The Time Passengers" provided the music for the evening and a light supper was provided. The net proceeds from the event will be donated to Coping With Cancer.

The Town Mayor attended the "East Meets West" concert performed by the Ratby Co-operative Senior Band at Braunstone Civic Centre on Friday 26th September. The Band played a selection of music by composers from around the world. Net proceeds from the show will be donated to the Ratby Senior Band.

The Town Mayor attended the World War 1 Commemorative Concert held at Braunstone Civic Centre on Friday 12th September. The event was also attended by the Lord Lieutenant of Leicestershire, Lady Gretton, the Chairperson of Leicestershire County Council and Blaby District Council. The Hathern Band performed a selection of music and songs from the era of the World War 1, along with poems and readings. The net proceeds from this event will be donated to the Royal Air Force Association.

The Town Mayor will be attending the Jobs and Skills Fair organised for Wednesday 10th September at Fosse Park Food Court between 11am and 3pm.

The Town Mayor has been invited to attend the Community Picnic to commemorate the start of World War 1 at Winstanley Community college on Thursday 14th August, 12 noon till 4.00pm. All residents are welcome to come along to the Picnic.

The Deputy Town Mayor, Miss Sharon Betts, attended the 82nd Scouts Summer Fete on Saturday 9th August at Thorpe Astley Community Centre. There were stalls, bouncy castles and games for all the family to enjoy.

The Town Mayor has been invited to attend the Allotment Society's Open Day on Saturday 9th August at the Rosamund Avenue site. The Open Day is on from 10am to 1.30pm and everyone is welcome to attend. The Town Mayor will be presenting prizes at 12.00noon and drawing the raffle at 1.30pm.

The Town Mayor will be opening the Braunstone Town Summer Fete on Saturday 26th July, 11am - 4pm on Mossdale Meadows. This annual event is packed with fun for all the family.

The Town Mayor has been invited to present the prize for the first event in the Braunstone Swimming Club's Open Meet on Sunday 6th July at Braunstone Leisure Centre.

This is an annual event marked by the Town Council to show its appreciation to those past serving and current serving members of the Armed Forces.